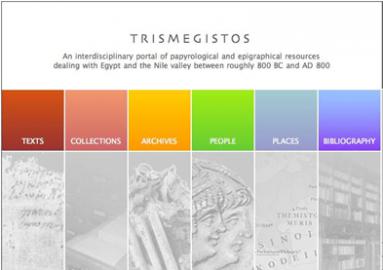 Trismegistos (TM) is a metadata platform for the study of texts from the Ancient World, coordinated and maintained by the KU Leuven research group of Ancient History. Originating from the Prosopographia Ptolemaica, TM was developed in 2005 as a database containing information about documents from Egypt between approximately 800 B.C. and 800 A.D. Other related databases contain additional information about individuals occurring in these texts (people); where these texts were found (provenance); when they were written (dates), where they are stored (collections); to which ancient group of texts they belong (archives); and several other types of information such as textual corrections, abbreviations etc. Recently, the database was expanded to the entire Ancient World.

The TM platform, currently counting almost 700,000 texts and more than 7,000,000 records containing all information, has two important goals. Firstly, it functions as an aggregator of metadata for which it also links to other projects. Secondly, it aims to provide stable identifiers for all types of information about the Ancient World, e.g. texts, places and people. With its unique id numbers and stable URI's, Trismegistos sets standards for and bridges the gap between different digital representations of Ancient World texts. This strategy enables TM to offer all its metadata as linked open data and attract other projects to connect with TM.

Go back to the projects overview page.